"Coir" the golden fiber that tied relationships across the globe 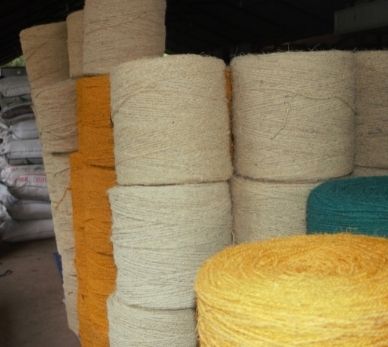 The coir yarn or the coco fiber as it is known is so strong a natural fiber, that travelled the world as ship cables. It generated a curiosity among many people around the globe and they started experimenting with the new rough and strong yarn. Some of them found it amazing and the strongest fiber used in their times. They travelled to India and reached Kerala to find about Coco fiber yarns.

It was a collaboration of many that made amazing products from the Golden fibre of Kerala. Coir carpets and rugs have revolutionized the floor covering industry for it was the best in terms of quality, durability and strength. And it showed surprising properties in winter season. Many industries started in Alappuzha, Kerala to meet the demands and Alappuzha became the land of coir and coir industries and it is still the Coir Capital of the world.

There was a wide possibility and people become demanding and the people in our land became more skilled. According to the product they started making different grade coco fiber yarns like "Anjengo" fine and thin and Vaikom rough and thick.

We in Craftpair uses Anjengo, Quilandy, Paravur, Hardtwist and Managdan. Somehow we need coir made in Kerala to get the desired quality in our products. We choose particular yarn for different products. The applications of coir yarn is many it is used as such as for binding and tying things. Supporting ropes for plants in farms.

Coconut is a great gift from nature and it could have been a curious discovery. A hard and big bowl shaped fruit in very tall trees. Then once they got and opened hard and rock like small ball inside; hats off to the people who haven't lost hope and throw that away. They put effort to open it to see delicious flesh and water. And in centuries it evolved into a thousand products in our daily life and that became means of living for a million!